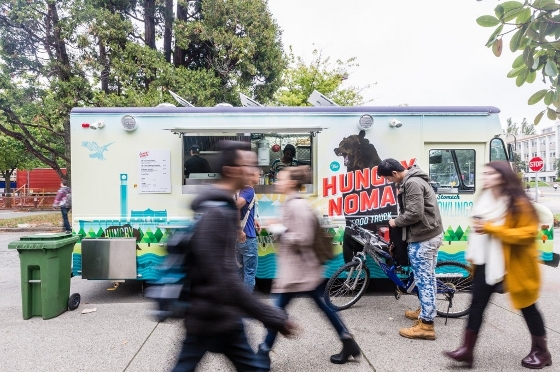 The food truck craze has swept across North America over the last decade. While Greater Vancouver has not been as quick as its south of the border sibling cities of Portland and San Francisco in adopting food trucks as a major part of its culinary scene the last three years have been a blast for mobile foodies in the city.

I'm not referring to the hot dog carts that have long been a staple in Vancouver, I'm talking about full-on eateries on wheels with menus to rival some of our best comfort food restaurants in town. Even some of the gourmet brick & mortars are getting a run for their money as local food truck menus continue to grow more sophisticated.

Not familiar with the food truck scene in Vancouver? This coming weekend marks the end of the now annual Food Truck Festival, with this year's location found on the expansive lot between Olympic Village and the Cambie Street Bridge. You have until September 22 to go and check it out. Be sure to save your appetite because you'll want to attempt to squeeze in all three square meals within the confines of the festival in one day. The variety is heavenly! For more information on the Vancouver Food Truck Fest and its vendors you can visit their website.

Now anyone reading my UBC real estate blog on a regular basis knows that every edition includes recommendations of some sort within the UBC area. Have I left my neighborhood out of the mix this time? Of course not. My pride in the community is relentless and I would not have touched on the subject of food trucks if I didn't have something up my tailored sleeve (OK, I don't actually get my suits tailored).

The late summer brought in Canada's very first arrival of an on-campus food truck. That campus? You guessed it - the University of British Columbia. Known as the Hungry Nomad, this mobile eatery is permanently stationed (contingent upon continued success) at the northwest corner of UBC's East Mall and University BLVD between 11:30 AM to 1:30 PM from Monday through Friday. Students in class during that time frame will likely be petitioning for extended hours very soon. The line-ups are already forming daily.

The cuisine up for grabs at the Hungry Nomad includes everything from Mediterranean to seafood and Carolina styled pulled pork to beef brisket. Another nice surprise is the price range which falls between $5 and 8 dollars - a student budget friendly treat that departs from the common $10-12 range that exists downtown. Given that the campus based food truck is the brainchild of UBC Food Services profits go towards supporting the university which ultimately serves the students twofold - belly included.

Whether a starving student or resident of the UBC area you should definitely hit the campus for a bite from the Hungry Nomand. The more successful this UBC based food truck, the more arrivals of others we can expect along the roads of the region. This perpetually hungry UBC Realtor will thank you for it.