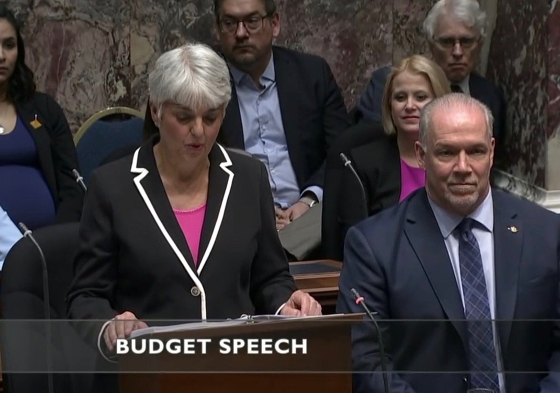 The Provincial NDP government is vowing to make life more affordable in BC, announcing a number of initiatives to achieve that goal in their 2018 budget. The financial plan is the first full budget for the minority NDP government since it came to power last summer.

The foreign buyers tax jumps from 15 to 20 percent tomorrow and will be expanded beyond Metro Vancouver to include Victoria, Nanaimo, the central Okanagan and the Fraser Valley.

“BC’s real estate market should not be used as a stock market,” she says. “We will introduce a new annual speculation tax starting in BC’s urban areas. It’s going to tax foreign and domestic speculators. This tax will apply to property owners who don’t pay income tax here, including those who leave their units vacant.”

The speculation tax will come into effect later this year for in Metro Vancouver, the Fraser Valley, the Victoria-area, Nanaimo Regional District, Kelowna and West Kelowna.

The province will implement a new speculation tax on residential properties, targeting foreign and domestic homeowners who don’t pay income tax in BC. This includes those who leave homes vacant.

The province will administer the tax and will collect data to enforce it including, social insurance numbers, household information, and world-wide income information.

Effective Feb. 21, 2018, the Property Transfer Tax on residential properties above $3 million will increase to five percent from three percent.